Ready or not here I come!!! Discovery and elation at the Rutland Prison Camp in Rutland Massachusetts. 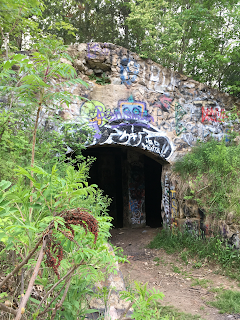 The oak tree stands tall against the rolling hillside as a lone sound comes from just beyond the layered bark.  Three, two, one…ready or not here I come!!  Muffled laughter as a child trembles with excitement in his hidden lair.  Footsteps echo in the air as the hunt commences.  What childhood would be complete without the exhilarating memory of a magical game of  hide and go seek?   It was, within the child in all of us,  the first taste of an adventurous quest for that which has gone lost.   Is that not what we as explorers crave?   Peeping and peering through every shadow to find that which is hidden.   Seeking skeletal remains of neglected infrastructure lying intertwined with wilderness gone rampant.   Such elusive treasure is like sweet nectar to the lips of the adventurous soul , evoking a hunger for discovery and a passion to ignite such feelings in others.


It was in our latest expedition to the Rutland Prison Camp in Rutland Massachusetts that we once again felt such triumph and a ravenous desire to share our experiences with those who would plop down on their couches for 20 or so minutes to watch our somewhat goofy, however (insert  shameless plug here)  highly entertaining video antics on YouTube.   Our commentary began as it always does with our unpolished, unrehearsed, off the cuff, what you see is what you get, style of recording the adventure of the day.  We had seen our fellow YouTubers exploring this location and had  ourselves been inspired by their videos to visit the remnants of this prison camp which once housed the not so naughty drunkards and low caliber criminals of the early 1900’s.  The sights were fairly familiar echoes of what we had previously viewed, but captivating nonetheless.    To be amongst such familiarity could quite possibly seem redundant, however, the vivid colors of street art,  the bright sunlight peeking through the decayed rooftops, the smell of  burnt remnants of soot from the last kegger bonfire, only  fueled our drive to inspire.    We pressed on through the desolated isolation cells, where once the prisoners who had disobeyed common laws of incarceration would peer longingly to the fields beyond their freedom.   Whispers of abandoned decay spoke clearly through the soft afternoon breeze, leading us further toward a dark cavernous, graffiti blanketed opening in the hillside just beyond the rotting cells below.    Apparent remnants of a root cellar (NOT A HOSPITAL…See our YouTube video to sympathize with Marcel on his daily tolerance of me constantly yapping my yapper.) with a dark and mildly creepy vibe.  It was perfect in its cognizance…a grand place to bring all of our seven subscribers on YouTube too!  But….there just had to be more!!


Enter geocaching…. (Seriously, you have to get involved with this activity!)  We had filmed just about all we were going to film.  The sun had provided us with just enough warmth to make it feel somewhat like spring and had just begun to descend into the lower three quarters of blue hued sky above.  It was then that we collectively (as has become a new habit with us) pulled out our cell phones to bring up the geocaching app we have come to enjoy so much.  Surely there would be a geocache somewhere in sight,  as we were in a State park with complete public access allowed.  A few swipes to the left and to the right, and there it was…a geocache to be found!!   We quickly gathered our GC backpack filled with BYOP’s , swag and trackables; and made our way through the knee high grasslands toward our GPS coordinates.    I’m sure in some perfect world, there MUST have been an easier pathway to this destination, but we are rebels and prefer a challenge (Attention Wildlife advocates…no wildlife or foliage was harmed in our quest to find a 5x5 waterproof container filled with goodies).    A few dodges of thorn covered bushes and tick infested shrubbery led us to an opening within the canopy.   There before us was the most beautiful site we had seen all day….Crumbling remnants of architectural magnificence.   Engulfed by nature’s web of foliage, intertwined with never ending vines and  surrounded by crumbling rock.   It was gorgeous,  and the euphoric feeling of discovery blasted the two of us as we gazed upon it’s,  untouched by vandalism and other dark clues of human intrusion, grandeur.  Camera rolling, we delighted in the fact that others may too come along on this grown up version of hide and seek.    Elated by our find, and ever watchful of the setting sun,  we decided to forgo the whole reason why we had found this treasure in the first place and drag our weary, but completed satisfied rear ends back to the explore-mobile (aka Marcel’s cool car).  The cache would lay untouched by the two of us, but would be held in high regard and respect, for it had taken us both by the hands and led us to yet another precious moment in time.     And as we are inspired by these places that we find, so often times by chance, we long to be the catalyst for discovery in others….to lead our subscribers and all that may stumble upon our newly born YouTube channel to…


”live deep and suck out all the marrow of life, to live so sturdily and Spartan-like as to put to rout all that was not life, to cut a broad swath and shave close, to drive life into a corner, and reduce it to its lowest terms...” –Henry David Thoreau


And to….for the sake of all that is untouched, undiscovered and just waiting to be explored…”Do whatever makes you feel ALIVE!!”


For the amazing video footage of this adventure, please visit…..
https://www.youtube.com/watch?v=D-DTyEyBayY