Exploring Elan, the Remains of a Controversial School for Troubled Teens.

“After all, when a stone is dropped into a pond, the water continues quivering even after the stone has sunk to the bottom.”  -Arthur Golden, Memoirs of a Geisha 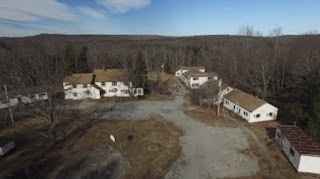 As are many roads off the beaten path, Number 5 Road, is all together unassuming and benign in its existence.  Well-manicured lawns, flower laden porches and echoes of child’s play line the drive toward our destination and speak with such familiarity to the nature of upper middle- class life in the peaceful and welcoming state of Maine.   Such beauty within the woodland, and a seemingly perfect place to call home.  As we drove quietly down the road, my mind wandered, as it so often does, to the history behind the homes that lined the path to, what we were soon to discover, was one of the most horrifically abusive places that we have ever laid our eyes upon.   Were the neighbors blind to the atrocities that occurred just beyond their white picket fences?  Did they not hear the panicked footsteps in the cackling autumn leaves of a child attempting to break free from the clutches that held them with such evil purpose just at the end of the drive?   Were their screams muffled by the sweet sound of songbirds and the rustling of the acorns as they blew in the breeze?  A small farm lies nestled just left of the road…how many broken souls sought refuge within the stalls as they pleaded with a seemingly uncaring society to free them from the hell beyond the emerald green pastures?


We had learned of this place through friends that we had met through the sweet power of social media.  A couple, much like ourselves, that delve into history and the mystique of crumbling walls, history laden cemeteries and tattered doorways.   Scanning through their pictures, including their own amazing adventures, silly sayings and a true love for their family, we could tell that we would connect with them right away.  We spoke of our love for Maine and how we would welcome any suggestions that they might have that could quench our collective thirst for exploration.   Our conversations with them led to an exploration that we would not soon forget.  A place that through our research, explore and the connection that we would then feel with the Survivors, would forever hold a staggering imprint on our souls.


The end of Number 5 Road was drawing near, and soon the buildings of the, now abandoned, Elan school began to slowly come into our view.

Opening its doors in 1970, it was billed as a therapeutic behavioral modification school, that was designed to take in troubled teenagers.  In its genesis and throughout the years, it claimed to be a healing haven for adolescents who were suffering from addiction, mental health issues and a menagerie of other factors that left parents at their wits end.  The peace and serenity of its location would assist in luring parents, and others with what one would assume would be the best interest of the child, into its lair of deceit.   Those who claimed to be experts in the field of recovery and behavioral health would ultimately reap a financial windfall of staggering proportions.  All at what cost?   It would later come to light that the types of behavior modification used were highly abusive and, from what we have found, would leave everlasting psychological scars on many of those who endured the unconventional and highly toxic techniques that were imposed on individuals who were just trying to navigate their way, toward maturity.


The summer sun was strong as it reflected off the now vacant and silent basketball court.   At first glance, it felt as though we were winding our way through a suburban neighborhood that had heartily been neglected by residential lawn mowers.  Each building reflecting simplicity in its architecture but giving off an atmosphere of camp like sanctuary.  Upon first impression, it would seem benign and peaceful, but the echoes of sadness, anger and desolation were heavy in the air.  We made our way in through an open window.  The soft breeze blowing outside followed us as we entered.   A doorway just beyond swung slightly open as if to beckon our arrival, but our welcome was short lived.  The door closed just as swiftly as it had open and we were left with the echoes of sorrow and pain.  Anyone who knows us, or has watched our adventures on YouTube, knows that we are lighthearted and fun when we explore.  It is our nature to joke around an act like two teenagers discovering everything and anything we see as if we are seeing it all for the first time.   This explore felt different.   Within our research, we had heard the words of the only people who really know what went on within these walls, and knew that we only wanted to honor them and to hold nothing but respect for what they had all gone through as a collective group of survivors.   We kept their stories close to our hearts as we toured each room together.   It is always in our nature to close our eyes and picture the rooms that we are exploring as they once were.  It is an attempt to imagine what they were like when life filled the space around us.  We often speculate about what we are seeing and in this explore, we did the same.   The difference was, we knew that looks can be deceiving.   We were humbled to have each room of our explore explained to us by the people who lived the horror within the walls.  We could never pretend for even a second that we know exactly what they went through in the past.  We can only offer our support and desire to advocate for them in the here and now.


Each room, each item found brought back memories for those who spent time here.   Many of the survivors that we heard from were thankful to see this place in its state of early decay.   Signs of peeling paint and dust covered relics are indicators that no other child will be subjected to the anger and abuse from within.   Having only closed its doors since 2011, there are still reflections of its past that are not quite left to the complete corrosion that we sometimes see on our explores.  What looks now like a well-run school, was once a dormitory filled with kids who were just trying to move forward and do what they had to do just to get out.   The haunting echoes of encounter groups, dealing crews and general meetings filled the air.  The image of a young teenage girl in a dunce cap being ripped to shreds and shedding tears of sadness filled our minds.  The stories of boxing rings, brainwashing, forced hierarchy that led to a Lord of the Flies type of atmosphere, 12 plus steps of bullshit just to use the bathroom, conformity, rage and an overall nightmarish feel broke our hearts and, quite frankly, made us mad as hell.


The voices of the survivors of Elan have been heard.  There have been bills passed to protect children and adolescents from ever having to suffer through what the survivors of Elan had to deal with.  There are advocates and people who truly have the best interest of the child in their hearts and minds.  Those who created Elan have since passed away, and by all accounts that we have heard, are not at all missed in the world of sane and empathetic human beings.   A resounding agreement of “may they rot in hell” proclaimed.   Their greed leaving a legacy of emotional scarring and post traumatic stress.  As for the survivors, well, the stories of this tight knit group continue to give rise to child advocacy and the support they have for one another is unwavering.   Through the voices that we heard, we know that many have come to terms with the time spent in the woods of Maine, but there are many who still live with their ghosts.  We do not wish to be the catalyst for bringing up nightmarish memories, only to respect each and every person who stepped foot upon its wicked grounds.   And to offer our heartfelt support for their wellbeing and for their futures as they navigate farther away from their past.   We entered this explore as we always do, in search of adventure and imprints of the past, but left humbled and as advocates for the survivors who, in some cases, lost their youth and innocence within these walls.

Our explore and this blog are dedicated to each and every survivor of Elan.   A very special thank you to all of you who reached out to us.  We know that we struck a few chords of angst as we wandered through each room and we thank you for letting us know just how this explore made you feel.    We want to let you know that we are thinking about you and will hold your stories close to our hearts forever.


Another big thank you to Todd Nilssen, survivor of Elan and the director of The Last Stop, a moving and emotional documentary featuring the stories of those who knew Elan and its controversial techniques the best…those who actually lived through the nightmare, the survivors.


Please take the time to watch this amazing film.

Thank you for taking the time to read this!   We truly appreciate your support and hope that you will come back and visit this blog and our YouTube channel for more explores and adventures in the future.  And… as always,


Do whatever makes you feel alive!