BSO syndrome, Ghosts and a Little Inspiration at the Hoosac Tunnel (Part one) 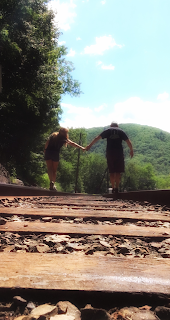 Part of the joy of being explorers is finding new places to travel to, new views to see, new secrets of days gone by to unravel, but there are always favorites that we long to return to.  Sometimes our yearning to return is to be within the familiar tattered walls of history.  Sometimes it's because our hearts felt happy when we were there.  But more often times that not, it's due to my "condition"...you all know someone who has it...here are the symptoms: flighty, often forgetful and easily distracted by sparkly things in the dust and darkness.  We often must return to our places of exploration simply because four hours of exploring with someone with "bright shiny object syndrome" turns quickly into eight, which quickly turns into the need to return to, for me...to find more treasures, for Marcel, to seek out and explore the places we may have missed.  Nevertheless, it is always exhilarating to return to our favorite places.  Within this blog, that I believe all of two people in this world of infinite explorers has read, I have decided to write an occasional thought or two about the places that we often return to.  Today's gem...The Hoosac Tunnel in Western Massachusetts.

Now, close your eyes and imagine that you are in back in the early 1800's.  There are no major roads, no semi-trucks lurking behind you as you traverse up a steep incline of highway, the familiar sound of jet planes flying over head is replaced by the soft howling of wind, and the sweet song of birds returning from their winter vacations.  Traveling from the beautiful east coast, through the mountains to the Midwest and beyond was not as simple as standing in an hour long line waiting for the TSA to uncomfortably pat you down before you could get into an aluminum tube that hurdles you thousands of miles in a few bumpy hours. Travel was time consuming and savvy business owners were using their collective intellect to find a way to get their goods to a wider base of consumers in a shorter amount of time.  In the beautiful Berkshires, industry moguls from Boston and surrounding areas were aching to get their goods through the rolling mountains that wandered through western Massachusetts leading up through the graceful and grand Green Mountains of Vermont.  And so, the dream of breaking through mountain to lay down flat bottom steel that could carry steam engine locomotives across through the Berkshires was born.  Now, me spewing out all of the history of the Hoosac Tunnel is bound to cause some slight snooze factor, as I tend to go on and on, however the brief history is one of importance as it is why this tunnel is so intriguing.  Here is a brief rundown..After years of struggle and legislative battles, work on the tunnel finally began.  It was to start with boring of  the eastern part of the tunnel with a innovative stone cutting machine that was designed to drill through the rough and rugged mountainside.   This wonder of modern, for that day and age, technology made it about 12 feet through rock before it faltered and was left abandoned (our kind of place!!).  Another site just to the right of the failed site was chosen and a new method was used.  It took 25ish years to complete,  amassing 17-21 million dollars in cost with 225 souls led to death...not the two year, fairly low cost tunnel that was at first proposed.

Now, all of these factoids are interesting and there are about a trillion things we left out, but we aren't writing this blog to help you get an A in Massachusetts history, we are writing this blog to ignite a fire in you...a desire to get out and explore!  So with that being said, we would like to tell you why we return to this "no cell service" part of Massachusetts several times a year...why it's intrigue captivates us and has become a somewhat of a home base for our adventures.  See our next blog for more!!

Do Whatever Makes You Feel Alive!!  -Jennifer and Marcel